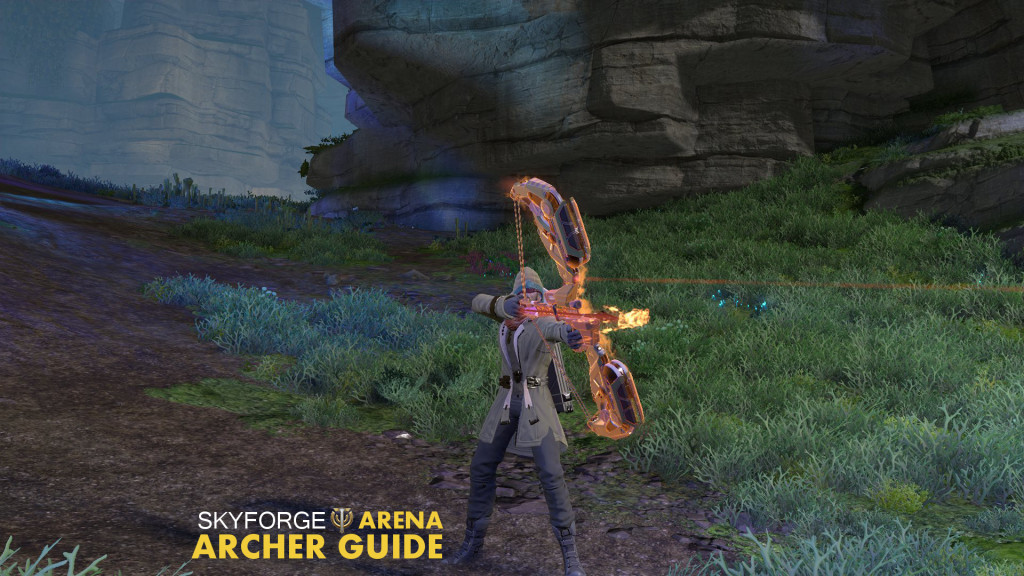 The Archer in Skyforge is a nice DPS class that has an array of stuns, excels at single target damage, enough AoE to mow down small groups of mobs, and has some unique tricks at their disposal like smoke screens and electric barriers. When you first read through the Archers abilities it may seem like a very straight forward class without a lot of depth but that isn’t true. With three different arrow types mixed with the various talents and abilities of the class you can customize the Archer to fit your play style nicely, whatever that may be.

This article is focused on PvE and group play, there will be a PvP focused guide in the future. Also, keep in mind that in the end you’re going to have to figure out what works best for your play style and in certain situations, I’m merely going to tell you what I use and why, however you may disagree and that’s OK.

Read everything or jump to a specific section.

Burning Rapid Fire or Electric Rapid Fire.  Both of these abilities are strong but in PvE group content BRF is the winner.  The reason to pick BRF over ERF is that BRF does more damage and can be proc’d to be cast for free.  The downfall of ERF is that boss mobs aren’t affects by the stun so even if you have Electric Burns it wont get applied to a boss because you can’t stun them therefore you are doing less overall damage to the boss.  So save ERF for PvP and take BRF. “Burning Rapid Fire – Fires several fire arrows in a row.  Inflicts damage to the enemy.  Consumes Concentration.  Fiery Arrow, Aimed Shot and Wildfire Arrow have 20% chance to activate the Ultimate Concentration effect for 4 seconds.  While this effect is active, next Burning Rapid Fire does not consume Concentration.”

Double Somersault or Jump Shot. Although Jump Shot gives you a knockback it’s minimal and doesn’t buy you much time. I like Double Somersault because it gets you out of the dangerous area quicker and provides you increased movement speed, the PvP player in me also likes that negative effects removed. Also, in situations with lots of mobs I rely on Electric Barrier so there is no need for Jump Shot. “Double Somersault – Does a few backflips and lands 10 yards away. All negative effects are removed, and the Archer becomes immune to them for 6 seconds. Movement speed is increased. At the end the Archer shoots a light and sound arrow that disorients enemies for 3 seconds.”

Smoke Screen or Gas Cloud. The slow of the Gas Cloud is minimal and never really seemed to hinder the movement of mobs by very much or players. Smoke Screen on the other hand is great for both PvE and PvP. If you are fighting a ranged mob you can cast the Smoke Screen and safely attack the mob from a distance and they wont attack you back, be careful against melee mobs because when they run into the smoke to fight you any teammates who are outside of the smoke will not be able to target the mob! “Smoke Screen – Fires a special arrow that creates a concealing cloud with a radius of 8 yards in the selected spot. The inside of the concealing cloud is not visible from out outside. The cloud lasts 10 seconds”

Fire Arrows III (Wildfire) and/or Electric Arrows III(Electromagnetic Pulse) and/or Sharpened Arrows II(Rain of Arrows). You get to pick 2 out of 3 of these abilities but I’m only going to tell you one that you must have because the other two are based on your play style. You should get Fire Arrows III because it’s an AoE that does a ton of damage over time and sets enemies on fire! You must get the talent Pyrophobia because this has a high chance to disorient burning enemies for 3 seconds (a.k.a. fear). Electric Arrows III is nice for a group stun of clustered enemies and Sharpened Arrows III is nice to help clear small mobs faster, your choice. “Wildfire Arrow – Fires a fire arrow that explodes on impact, setting fire to it and inflicting damage, as well as additional damage for 12 seconds to the target and all enemies in a 12 yard radius of it. Activates Impulse Charge.”

Electric Barrier or Trip. I’m a big proponent of Electric Barrier because it affects more than one target, provides immunity to crowd control effects, it can last up to 12 seconds, and you can get an off-hand weapon that lets you take reduced damage while inside of it! I’ll just let you read it, the ability sells itself. “Electric Barrier II – Creates a barrier with a 6 yard radius around the Archer that paralyzes enemies that cross it for 3 seconds, inflicting damage. Makes the Archer immune to control effects in the area of effect. Lasts 8 seconds”

I want to add that Archer can be played a variety of ways due to their arrows and coinciding talents so I’m just going to highlight some nice talents and let you choose your build.

Easy Target. “Piercing Shot removes all burning effects from the targets and inflicts additional 600% damage. The effect can be activated on the same target only once in 10 seconds.”

Pyrophobia. This talent is great while playing solo and in squads however, once you enter higher tier group content tanks may have a hard time controlling the mobs and you risk pulling additional mobs due to enemies running around sporadically while feared.“Has a 20% chance to disorient burning enemies for 3 seconds every second. When the effect ends, enemies will be immune to it for 30 seconds.”

Electric Burns.  It is important to note that Electirc Burns is only applied to targets that are stunned.  This means that it does not work on boss mobs which is where you want to maximize your damage so this talent is better for solo content and the PvP arena and will decrease your damage in group content.  “Damage dealt by the Archer and their allies to targets stunned by electric shock is increased by 20%. (Electric shock is caused by Piercing Discharge, Electric Rapid Fire, Electromagnetic Pulse, Electric Barrier.)”

If you play long enough and master enough classes you’re going to get 29 symbols (starting 3 + 2 per class mastered) so you’re going to have plenty of options on Symbols. As a DPS class you want to maximize your damage so those are what I’m going to mention here, with one exception.

Lacerated Wound. “Critical damage applies an effect to the enemy that inflicts damage over time. Total damage is equal to 100% of the character’s Luck.”

Maximum Recoil. “Critical damage is increased by 10% for each level of this symbol.”

Ultimate Strength. “The effect of Strength on your base damage is increased by 10% for each level of this symbol.”

Mobilization.  “Bonus damage is increased by 10% for each level of this symbol.”

Archer Symbol – Cold Calculation. “Damage inflicted to enemies with more than 50% health is increased by 12%.” This increases your damage for half the fight, seems good to me.

Paladin Symbol – Divine Intervention. “Incoming damage is completely absorbed if it is more than 10% of the maximum health. The character becomes immune to all damage and negative effects for 4 seconds. The effect is activated no more than once every 70 seconds.” This is one of the best symbols in the game and everyone should get it. This will save your life when the boss randomly targets you or you stand in a frontal when you weren’t supposed to.

The Archer is a really fun class to play and I never feel underpowered or that I can’t handle a certain situation. Like most archer classes you should always start the fight at a nice distance from the target and try to keep that distance as much as possible during a fight as being close doesn’t help your damage output and could lead to an early death if you aren’t careful.

I begin a fight by unleashing Wildfire which starts a nice DoT on all mobs in the area. From here if there are any small three diamond group mobs you have a few choices.

Once the small mobs are out of the way you can focus doing single target damage to daggers, shields, or a boss. After Wildfire I’ll usually go into Burning Rapid Fire and keep in mind Burning Rapid Fire does 62% more damage to enemies when you have the talent Biting Flame. After that I’ll cast Aimed Shot and look at the burning DoT timer on the targets debuff bar. At this point it should almost be out so I’ll fire Piercing Shot which does an additional 600% damage to burning targets and removes burning. Then I start the rotation over excluding Burning Rapid Fire because it is on cooldown. So I use Wildfire again, two Aimed Shots when I have concentration, then use another Piercing Shot before the burning ends, and continue this rotation taking in and out Burning Rapid Fire as it comes on and off cooldown.

The Archer does have nice utility abilities. The Smoke Screen can come in very useful if you are being attacked by ranged mobs. Once you cast this ability all ranged attackers will stop attacking you and from what I’ve seen will not advance towards you to get “in range” to hit you. You can just sit and attack them from inside your smoke screen and they take the hits until the ability ends and they can see you again. Again, remember that if you cast this ability and a melee mobs comes inside the smoke screen to attack you all allies outside of the smoke screen will be unable to see the mob and therefore cant attack it. Electric Barrier is a nice “oh sh*t” ability and comes in handy if you are in a boss fight and lots of adds spawn and the tank does pick them up right away, maybe the trash pull is difficult, or someone just pulled two groups at a time. It will stun all mobs as they pass through it, deals damage, and applies Electric Burns which increases damage to the target by 20%. There is also an off-hand that allows you to take less damage while inside of it.

Although this tactic is more useful in PvP I feel I should mention that the Archer can become a “siege bunker” that deals lots of damage and is very hard to get to. To do this you use the combination of Smoke Screen, Electric Barrier, and Deadly Shot all at the same time in that order. When you do this you are shooting out tons of damage to all enemies who can’t range attack you or even see you and when they come in to try and stop you they will get stunned by electric barrier for three seconds while you riddle them with arrows. Once inside they can’t CC you and you take less damage depending on your off-hand, once you finish Deadly Shot you can handle quickly finish them off if they aren’t already dead.

These are some standard temples for DPS classes. I’m not saying to only get these temples, just that you should check these out as they help increase your damage output.

Accuracy. “Brings the minimum base damage closer to maximum and increases your Strength’s influence on the base damage.”

Temper. “Increases bonus damage and the chance that the ability will inflict maximum bonus damage regardless of the target’s health”

Crushing Blow. “Has a certain chance to increase base damage two times”

Thanks so much for these guides, I am using this and Knight, so I will see how they work out. For the archer, I don’t see Deadly Shot and I have my archer atlas fully complete. thanks again!