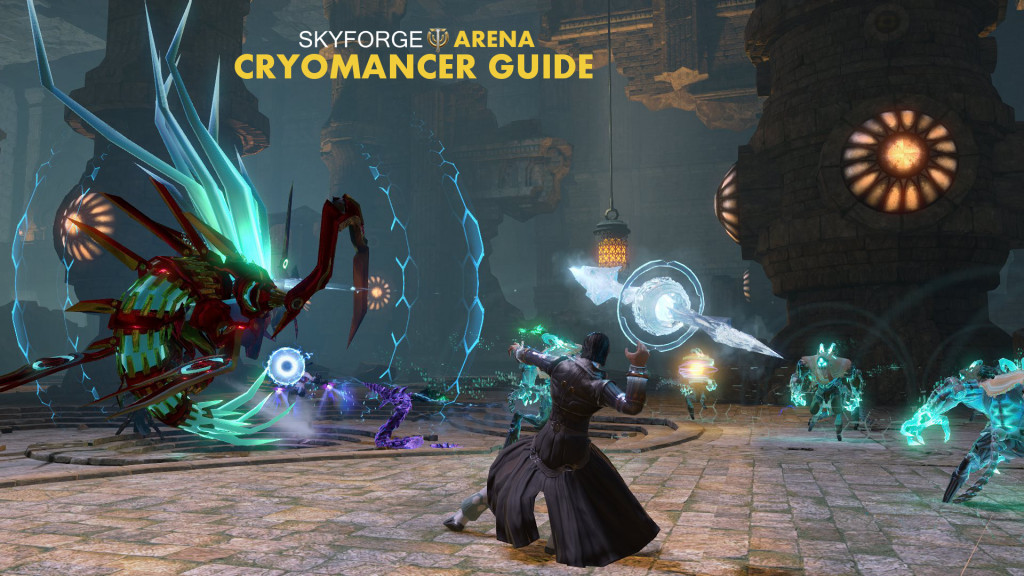 The Cryomancer, Cryo for short, is one of three starting classes that you can play in Skyforge without purchasing a collectors edition and it is the main DPS class out of those three. The Cryomancer is your typical ice mage that is capable of high burst damage, plenty of Crowd Control (CC), and great Area of Effect (AoE) damage. As with most mage classes high Damage Per Second (DPS) comes at the price of being squishy however, the class does get some nice survivability tricks to keep them alive if you time them right.

This article is focused on PvE and group play, there will be a PvP focused guide in the future. Also, keep in mind that in the end you’re going to have to figure out what works best for your play style and in certain situations and I’m merely going to tell you what I use and why, however you may disagree and that’s OK.

Read everything or jump to a specific section.

Icy Comet or Snowball. Let’s face it, Snowball sounds great and when you first read the ability I’m sure you got excited and wanted to get it right away. Although watching enemies roll away in a giant snowball is hilarious you will quickly grow bored of it and find that it is not very useful which is why I chose Icy Comet. “Inflicts damage to the target and all enemies in a 8 yard radius of the target. Applies Intense Cooling that reduces their movement speed. The range is 30 yards.” It’s a good damage ability and you can get the Avalanche talent which makes it do 25% more damage.

Crystal Shield or Ice Statue. Easy choice, Crystal shield. Again, Ice Statue seems cool but once you start playing the class you’ll quickly understand Crystal Shield is a better choice. “Creates a shield that absorbs 60% of damage for 6 seconds. All targets in a 5 yard radius are affected by Intense Cooling that reduces their movement speed. Once the maximum number of effects have been stacked, Icebound is applied which immobilizes the targets.” This ability lasts for 6 seconds, slows targets, and absorbs a ton of damage. You can also get a talent, Shivers, that increases damage by 20% making your shield absorb 80% damage. Whether soloing or in a group this ability will save your life.

Cryobeam or Cryotrap. “Inflicts damage to all enemies in the line of movement.” Although Cryotrap has CC the Cryobeam does a ton of damage and is an instant cast ability. You can also get the talent Cryocharge that inflicts 3x more damage, think about it. As stated in the tooltip this ability does damage in a line so once you get used to it you can line up targets and burn them down quickly.

Jagged Ice or Stasis. I choose Jagged Ice because it is a nice no cost damaging ability that does good damage. “Inflicts damage to the enemy every second for 5 seconds.”

Whiteout or Snowstorm. Honestly, you just can’t beat the damage Whiteout can produce and groups will love you because of this ability. Whiteout will make your damage numbers soar and will obliterate any amount of adds or non-boss mobs out there. You can also find an off-hand weapon (additional weapon) that gives you 168% increased damage to Whiteout. “Creates a 12 yard radius area. All enemies that enter the area take damage every second. Lasts 10 seconds. Every 3 seconds Intense Cooling is applied that reduces their movement speed.”

I want to add that Cryomancer can be played so many ways as they have a wide variety of damage  dealing abilities so I’m just going to go over some talents that I think are nice but I’m not saying to get all of these for one build.

Slide. “Cryomancer’s Dash becomes Slide, that allows them to move 15 yards in the direction of movement, leaving an icy trail behind. Intense cooling is applied to any enemy that remains in the area of the trail, reducing their movement speed. Once the maximum number of effects have been stacked, the Icebound effect is applied which immobilizes the enemy. Inflicts damage every second.” This is a must have ability.

Cryocharge. “Cryobeam can consume two times more Cryogen to inflict 3 times more damage.” If you use Cryocharge you really should have this, it also makes Cryocharge one of your hardest hitting abilities for both single target and AoE if you line it up right.

Exhaustion. “Cryonic Pulse’s charge level 1 (Shattered Storm) and Fragments left behind by Icy Missle inflict 110% more damage to targets with less than 50% health.” The extra damage this inflicts is very noticeable and I recommend you try this talent out.

Frostbite. “The duration of Whiteout and Snowstorm is increased by 4 seconds. Intense Cooling is applied every 2 seconds.”

Cold Veil. “Crystal Shield cooldown is reduced by 11 seconds.” I just wanted to mention this talent so you are aware of it.

Avalanche. “Icy Comet inflicts 25% more damage and consumes 40 less points of Cryogen.” If you use Icy Comet as your main damage ability you should have this talent.

Icy Blade. “Icy Missiles’ charge levels 1 and II (Icy Thorn and Icy Dart) inflict 200% more damage to targets that have Cryonic Suspension effect, removing it and knocking them down for 2 seconds.” Although this ability is king in PvP it is still great in PvE as well. The increased damage is great and having a knockdown is amazing, both for solo and group play. You can freeze and enemy using Icy Beam, or any number of other abilities, then immediately use Icy Thorn for that knockdown which prevents the mob from doing damage to your or allies.

If you play long enough and master enough classes you’re going to get 29 symbols (starting 3 + 2 per class mastered) so you’re going to have plenty of options on Symbols. As a DPS class you want to maximize your damage so those are what I’m going to mention here, with one exception.

Lacerated Wound. “Critical damage applies an effect to the enemy that inflicts damage over time. Total damage is equal to 100% of the character’s Luck.”

Maximum Recoil. “Critical damage is increased by 10% for each level of this symbol.”

Painful Spasms. Impulse damage applies an effect to the enemy that inflicts damage over time. Total damage is equal to 200% of the character’s Spirit.”

Ultimate Strength. The effect of Strength on your base damage is increased by 10% for each level of this symbol.”

Archer Symbol – Cold Calculation. “Damage inflicted to enemies with more than 50% health is increased by 12%.” This increases your damage for half the fight, seems good to me.

Paladin Symbol – Divine Intervention. “Incoming damage is completely absorbed if it is more than 10% of the maximum health. The character becomes immune to all damage and negative effects for 4 seconds. The effect is activated no more than once every 70 seconds.” This is one of the best symbols in the game and everyone should get it. This will save your life when the boss randomly targets you or you stand in a frontal when you weren’t supposed to.

The Cryomancer is a fun class and has a fairly straight forward play style for PvE. I’ve seen Cryomancers who use Icy Comet as their main damage ability and their damage numbers are just fine while other players, including myself, might not use Icy Comet that often except for the start of the fight with multiple mobs. I focus my attention more on Cryobeam, Jagged Ice, and Icy Missle.

When you play a class like Cryomancer you have a variety of abilities which all shine at different moments so your approach to each pull is going to be vary some. When pulling a group of mobs don’t be afraid to use your Whiteout if it’s up to quickly eliminate that group. If that ability is down then you have quite a few options based on the group of mobs you are attacking and whether you are playing solo or in a group. I’m going to focus on group-play as I’m sure you’ll figure out solo quickly because either you’re going to be dying or not.

In most groups your tank will jump into a group of mobs and pull them all together, at this point I’d lead with an Icy Comet followed by a Cryobeam since all the mobs are bunched up. Keep in mind that you do have Freezing Gale which can come in handy but I’ll leave it up to you to know when it’s appropriate to use. Now that you’ve used your AoE abilities its time for single target damage. At this point I would lead with an Icy Dart so that the DoT starts ticking and then go into channeling Jagged Ice. If you decide to get Icy Blade for the knockdown and added damage then you can throw out an Icy Beam followed by a quick Icy Thorn and then channel Jagged Ice. I probably don’t need to mention this but I will, always use your “auto attack” Cryonic Pulse when waiting for your Cryogen to replenish because the damage will quickly add up.

Keep in mind that you can help out your allies by using some of your crowd control abilities. If you are in a boss fight and multiple adds spawned but the tank hasn’t gotten to them yet don’t be afraid to dash in and cast Glacial Fangs to AoE freeze multiple enemies and buy some more time.  Your tank will thanks you an so will the rest of the group.  The same goes for that pesky add that is chasing your support, just use your Icy Beam to quickly freeze the mob and wait for the tank to pick it up or burn the add down yourself.

Rings and Amulets depend on what build you are going for so I’ll leave that up to you. So that you are aware there are amulets that provide bonuses to the following abilities, in no specific order.

I’m not saying only focus on the ones I’m going to mention, these are just some good ones for the class.

Accuracy. “Brings the minimum base damage closer to maximum and increases your Strength’s influence on the base damage.”

Discharge Recovery. “Increases the frequency of Impulse Charges and the amount of impulse damage”

Crushing Blow. “Has a certain chance to increase base damage two times”